When we think of our educational experiences, we often to questions that teachers have asked us. Memorable questions. Not, “What is your name?” Hopefully, something more insightful. Deeper. Engaging. Something requiring thinking work. Is the role of the teacher to impart information? Give answers? Or stimulate inquiry?

Much is written about “scaffolding” and “modeling” when we teach. These are instructional strategies. Experienced teachers provide frameworks for understanding by using concept maps like those in Inspiration, presenting information as an advanced organizer, or eliciting prior experience through quick-writes, or using an engaging entry event for a project based learning unit. There are many ways. However, what marks the great teacher is the ability to ask questions; to follow lines of student thinking; to engage in conversations of inquiry.

Students also have their memorable moments in the classroom – experiences that resulted in an “Ah ha!” Students may seek answers, but it is at that moment of putting together the disparate pieces of the puzzle that the spirit of the philosopher is born.

I watched Fareed Zakaria’s Global Public Square today. It had a fascinating discussion about the relationship of neuroscience to public policy. In this case, the focus was Iran. One of the participants said that the human brain was consistent across all cultures even though behavior might be different. It made me think about making connections.

Good question. The Atlantic article about David Hostaedter, The Man Who Would Teach Machines to Think, states that thinking is about analogies. Some might call the author one of the pioneers of artificial intelligence. My concern, of course, is human intelligence. What is higher order thinking?

The following chart indicates the relationship between levels of analysis (often thought of as a hierarchy) and levels of connectedness (analogies, interrelationships, etc.).

Few might argue that education has nothing to do with thinking. Yet the definition of thinking is still up for grabs in the minds of the average person. For many who are not in the school system, thinking becomes recollection, memory or focus to the task at hand – perhaps solving a problem. In general usage it is often a synonym for acquired skills. It is probably more likely to have to do with opinion than analysis. “Oh, I thought you meant ….”

Thinking burns calories. It is work. Teachers often prod their students with the command “Think!” when it is apparent that they have not. Bosses and sports coaches often do the same. Sometimes parents. When I was younger, my mother used to scold me: “I swear, if your head weren’t attached to your body, you’d forget it.” Now when I remember those earlier years, I realize that sometimes I just did not think things through.

As both a parent and a teacher, I learned that so much of thinking was developmental. As a teacher I learned that classroom activities had to be “developmentally appropriate.” When I read Piaget, I began to understand the developmental nature of our own psychology. What can be understood tomorrow may not be able to be grasped today.

The modern dilemma of education is that it is too often divorced from possibility of achieving mastery; too often ensnared in the emotional experience and trivia of everyday life.

The Role of Collaboration in Thinking

School is many things. It is more than bricks and mortar. It is a societal institution and a place of learning. Many will debate its goals and objectives, and many philosophers and researchers have pondered the intertwined relationship of teaching to learning. From my perspective, school is primarily about student learning.

Learning is not one-dimensional. Learning in school is social, emotional, physical and cognitive. School is also a developmental phenomenon. A six year old child is fundamentally different – perceives, reasons and acts differently – than a 13 year old teenager.

Let’s consider cognitive development: the development of the mind. Student learning has to be active to be effective. Active learning implies both inquiry and construction of knowledge. And it never occurs in isolation. In other words, learning occurs in a social context. That is how we learn point-of-view; it is how we learn to evaluate truth or falsehood.

Is evolution real? Which metaphor best applies to our age?

The Sub-Topics of this blog:

How Does One Integrate Social Media with Education?

With a multiplicity of tech tools at our disposal, we can embed inquiry in project based learning.  Students use technology tools, but the tools are a means to an end. The focus is the thinking that underlies inquiry and then the creation of final products that demonstrate learning while communicating in an authentic fahion.

Start with a broad open-ended “essential question” to focus the project. Such as question cannot have a single answer. “Fill in the bubble” is not allowed here! Perhaps we can ask something like, “What is the essence of democracy?”  Or “Does democracy require oversight?” You can ask, “Is privacy a right?” “What is a healthy ecosystem?” Or “When is too much enough?”

Require that students provide evidence for their thinking so that the argument or research can be evaluated. Require that the answer use the targeted tech tools; and the findings be “published.” Next, require interaction. Specifically, require that other students – collaborators – respond through comments or threaded discussion. I personally love Wikis as a way to build a portfolio of responses. Finally, build in assessment. Have students submit an individual written reflection to you of what they learned.  Include what worked, what didn’t work, and why.

Web 2.0, or is it the Second Coming? Inspiration from from William Butler Yeats:

Turning and turning in the widening gyre The falcon cannot hear the falconer; Things fall apart; the centre cannot hold; Mere anarchy is loosed upon the world.

Source: The Second Coming by W. B. Yeats, Poem of the Week

Research on Identity and Imagination for Digital Natives

Here are some key works:

Chicken or egg? The Relationship of Work and Education

Re-imagining education in the 21st century may require re-imagining work. Dave Coplin suggests that the social paradigm of collaboration has shifted. In the classical production era (call it when you will, but the entire latter half of the 20th century would qualify), workers would work in private, and they would then collaborate in limited ways. Now in the more open era, the concept of privacy has shifted. We work in public (in the cloud), and we then decide whom to block.

The Economist magazine, which I read, had an interesting article on “Private Parts,” The chart includes how different countries – and cultures – view privacy. 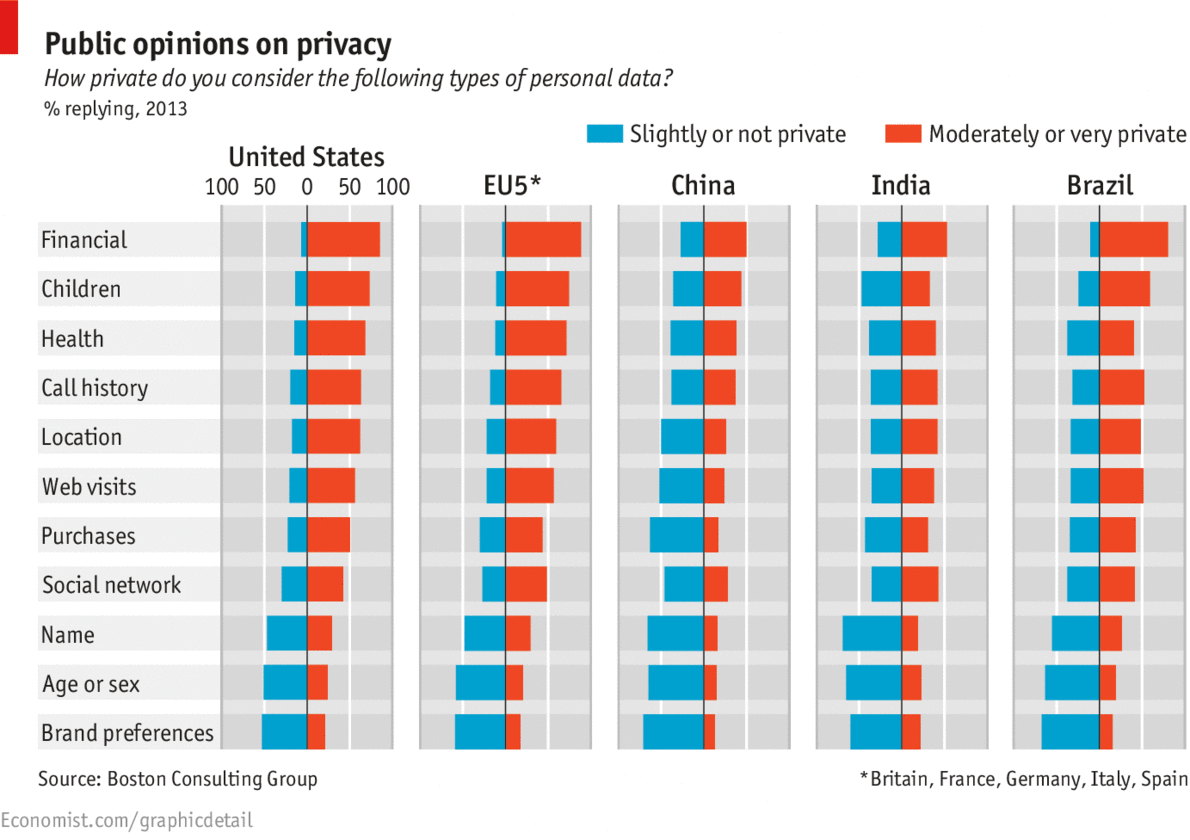 1 thought on “The Role of Thinking in Education”